PreCheck MyScript integrated directly within your EMR allows you to easily run a pharmacy trial claim and get real-time prescription coverage detail for your UnitedHealthcare patients.

Reference Guides and Other Resources

If you’re new to PreCheck MyScript, here are some resources to help get you started:

What is PreCheck MyScript?

PreCheck MyScript is an innovative service available through Point of Care Assist.

PreCheck MyScript benefits your practice by enabling doctors to view prescription costs in real time, potentially obtaining prior authorizations before the patient leaves the exam room and integrating directly with the practice’s existing EMR platform.

And that’s not all.

Providers can save too, up to 50 minutes and $41 per prescription per patient by avoiding prior authorization.

In most of prescribing occasions, when a Tier 3 drug was prescribed, PreCheck MyScript suggested alternatives.

This resulted in physicians switching to a Tier 1 or 2 drug when available, saving the patient money.

Patient medication adherence increased by up to 4% for diabetes, 4% for hypercholesterolemia and 2% for hypertension.

With improved interoperability, you’ll have the tools and information you need, when you need them, to make a difference in the lives of individuals.

This is only the beginning, there’s a lot more to do.

That’s why we’re in this together. Let’s change the course of healthcare. 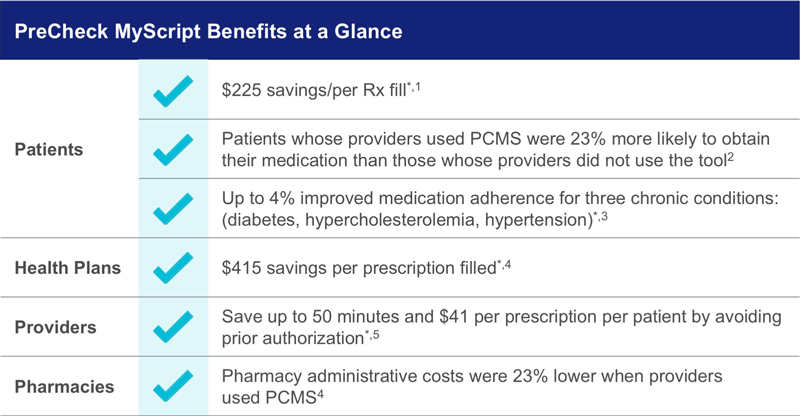 * This figure is based on historical experience and is not intended to be predictive of individual member results or a guarantee of future performance. Actual results and individual member experience will vary based on multiple factors, including, but not limited to, plan design, population demographics, utilization, claims experience, network market conditions and other factors.